Behind the joint development of Jabra Elite 75t

Jabra Elite 75t is now the fourth generation of GN’s true wireless earbuds. But they wouldn’t be as small, reliable, and long on battery life without the know-how of the hearing aid experts working just down the hall. Find out how consumer electronic and medical expertise cross-pollinate at GN to drive hearing experiences forward.

From ear-to-ear: The challenges of getting to truly wireless

While “cordless” headsets, which use Bluetooth to connect to a computer or phone, have been around for close to 20 years, cutting the last cord connecting the left and right ear is no simple task. That’s why truly wireless earbuds only emerged recently, towards the end of 2016.

Because truly wireless earbuds do not have any wires between them, they need radio technology to communicate sound between the left and right earbuds. The MI5 chip (read more below) developed by GN Hearing for the just-released ReSound ONE, is the technology in Jabra Elite 75t which enables ear-to-ear communication

Mark Brooks, Director, Integrated Circuits (custom electronic “chips”), in GN’s hearing aid division, explains: “Bluetooth is great for sending information between two devices, except when there’s something in between, like your head. The near field magnetic induction (NFMI or just “MI”) technology is an alternative technology which works with a small range and can send signals between your ears using much less power,” Mark says.

Back in 2015, GN Hearing was investigating MI ear-to-ear technology for hearing aids. They knew that at the same time their colleagues in Jabra were developing true wireless earbuds, so they began chatting about concepts for the MI chip.

The catch is, though, it’s not an easy technology to work with, as Bo Schmidt, VP Technology at Jabra explains.

“You have to integrate tiny chips into a headset. And in a headset you have different noise sources, so it’s very tough to get the chip and connectivity to work under those noisy conditions. We were one of the first to crack that problem, which is why the previous generation earbuds Elite 65t have been such a success,” Bo says.

An exploded view of the technology inside Jabra Elite 75t. The finished earbud is less than 22mm long.

When thinking small is a strength

Just a few years ago, it wasn't exactly Jabra’s game to do miniaturization. Most headsets for leisure and the office were the larger on-the-ear or over-the-ear styles.

But down the hall at older brother GN Hearing, miniaturization has always been the name of the game. After decades of developing discreet hearing aids, GN Hearing’s engineers are well-accustomed to the challenges of tiny in-ear technology.

“In our chips, which are where all this technology is taking place inside the hearing aid or headset, we work in nanometers. This chip here, which is in the Jabra Elite 75t, is only 1.9mm long, yet it contains about 10 million individual transistors to make it work,” Mark demonstrates. 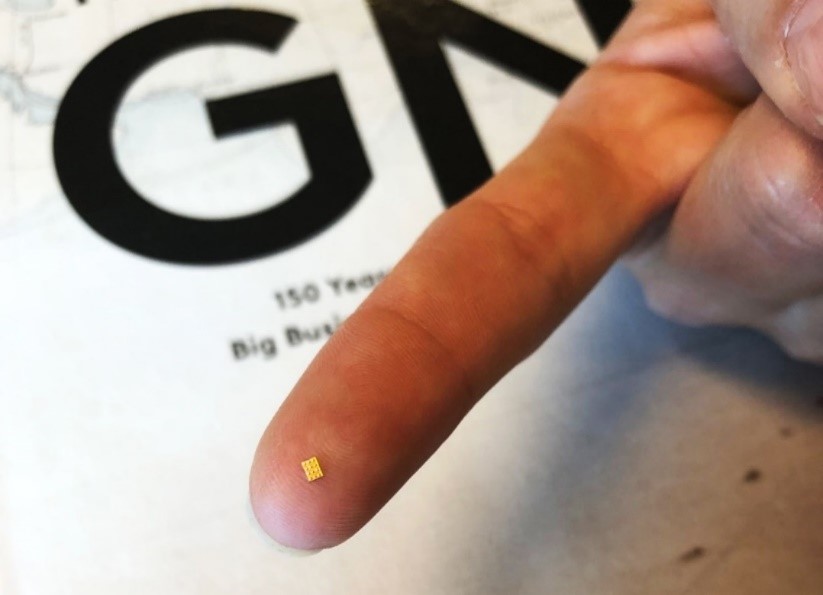 The MI5 chip, which is where all of the technology that allows the left and right earbud to send audio to each other, is less than 2mm long

One of the challenges of using the same chip for different purposes is that the different products need to do different things, because the needs of hearing aid users and audiophiles are different.

“People who use Jabra headsets want top sound quality for streaming music and calls, whereas for a person who wears a hearing aid all day, it is very important that the battery lasts for the whole day,” Bo explains.

“Our challenge as chip designers in GN Hearing is always to improve the power efficiency of the hearing aid, whereas GN Audio’s challenge is in constantly refining audio quality. We also have a lot of requirements we must meet as a medical grade product, which means longer development cycles” Mark adds.

Mark Brooks’ and Bo Schmidt’s teams collaborated across GN's hearing aid and headset divisions on Jabra Elite 75t. In the background are drawings of previous generations of GN chipsets.

To make Jabra’s requirements work on GN Hearing technology, a Jabra music streaming mode was implemented on the GN Hearing chip, and the developers got to work.

“There were some planning meetings, but a lot of the work was done through people just connecting,” Bo explains.

More than sharing a coffee machine: the cross-GN scientific network and labs

On top of project collaborations and knowledge sharing, formal structures like the Scientific Advisory Board benefit both GN divisions. The network of research scientists from academia and advanced technologies give input on new developments in sound processing and drive the research agenda across GN. Sharing a physical site at GN HQ, just outside Copenhagen, also means mutual access to the advanced research labs. Take a 3D tour here [Video].

One thing software developers from both sides pointed out during the development of Jabra Elite 75t was the serious advantage of being in the same building as Mark’s team, who design the physical hardware.

“Previously in Jabra we would buy this type of chip from a supplier. But using GN’s own MI5 chip for the Elite 75t proved much more efficient, not to mention cost-effective. When we buy an off-the-shelf chip, if there are any adjustments needed, we have to go through that process with the vendor, where the engineers are not as familiar with our technology and can’t always prioritize us immediately,” Bo explains.

In addition, having the chip expertise in-house means we end up with better power performance and other features for customers which give GN’s technology a competitive edge, Mark explains.

“If a software engineer wants to develop something in a particular way, because they have a particular feature in mind for the customer, they can guide us in terms of the direction of our development. For example, if our processor isn’t supporting the algorithms they want to use sufficiently, we can customize the sound processor’s instruction set,” says Mark.

An extreme close up of the MI5 chip. The finished chip is 1.9mm long

Both Mark and Bo expect to see even more collaboration across GN’s research & development in the future.

“There were many challenges integrating the chip into Jabra Elite 75t, but we had a lot of engagement and cooperation on the engineer level. That was super. Over time, I hope we’ll see even more examples of working together,” Bo reflects.

“Definitely the more we work together, the more good things we’ll see in both companies that we can exploit,” Mark says.