Why we should welcome our robot co-workers

Whether it’s flight price comparison websites, self-service check-in kiosks at the airport or re-ordering printer cartridges, the robots are here, and there are even more coming to take over human tasks. There is no doubt automation is profoundly changing the nature of work, but in GN Hearing’s production facility in Denmark, the effects of automation are not what you think. 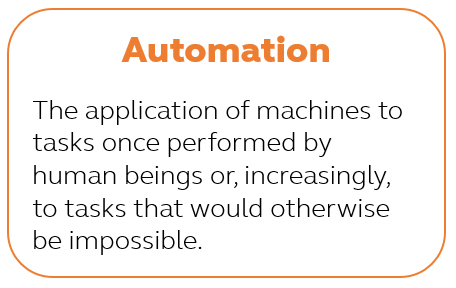 When Vibeke started at GN more than three decades ago, the Berlin Wall had just fallen, Phil Collins was on the radio, and big hair was in vogue. Comparing her first week on the job to what she does today, she can hardly believe the difference.

Back then, Vibeke and her colleagues manually carried the components across the factory floor, inserting and removing the printed circuit boards (the green plates in the photograph above) between the more than 20 machines involved in the process of manufacturing a microchip. Some components they assembled themselves by hand.

But as the company grew, the manufacturing demand outgrew the facility in Denmark and most production was moved offshore. At the same time, the components became too small to be assembled by hand. (Learn more about the miniature technology of microchips and where it is going in AI Challenges How Technology is Designed [Article].

‘The bots are coming for us’ and other automation fears

‘The bots are coming to replace us’ is an oft-cited concern about automation. A recent survey of 10,000 workers found that more than a third are worried about automation putting jobs at risk1.

Indeed, it is estimated that by 2030, up to 30% of the hours that are worked globally today could be done by machines2.

When production shifted at GN Hearing, instead of closing down all manufacturing in Denmark, GN deliberately retained its facility at Præstø. It invested 35 million Danish kroner to expand it into an advanced facility for manufacturing sophisticated plastics and the most complex components of a hearing aid: microchips. 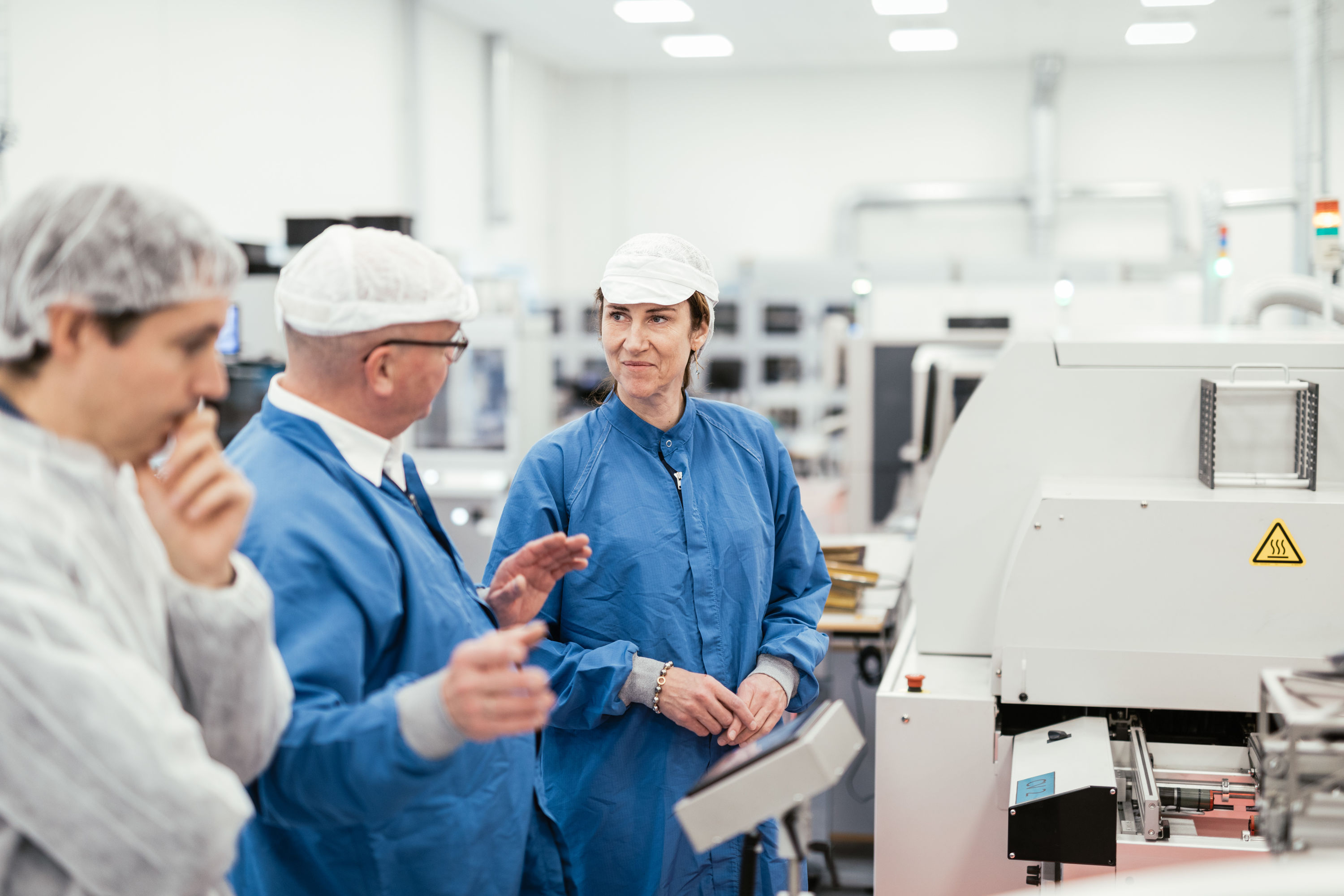 More jobs, not less, and with more complexity

When the expanded factory opened in 2016 and a handful of shiny new colleagues from Universal Robots appeared on the floor, there were surprisingly not fewer human hands on deck. In fact, there were more.

Due to the company’s growth and its investment in up-skilling existing employees, there are now 10% more employees than before the robots came on board. This is in line with expectations that the opportunities automation will bring in terms of job creation will offset the losses3.

There is no doubt automation is changing the nature of work, but if you ask Vibeke, it’s for the better.

“When you look at the tasks we do here, they are far more exciting than those that we used to do manually by hand. We've got a more interesting workplace while the machines take care of the monotonous work," Vibeke says.

Now, instead of manually picking up the components and moving them from machine to machine, the robots do this automatically, meaning many processes can happen in parallel. They also handle the fiddly work of assembling the extremely miniature chips and plastics, and Vibeke’s role is to function as a specialist who operates and monitors the robots. 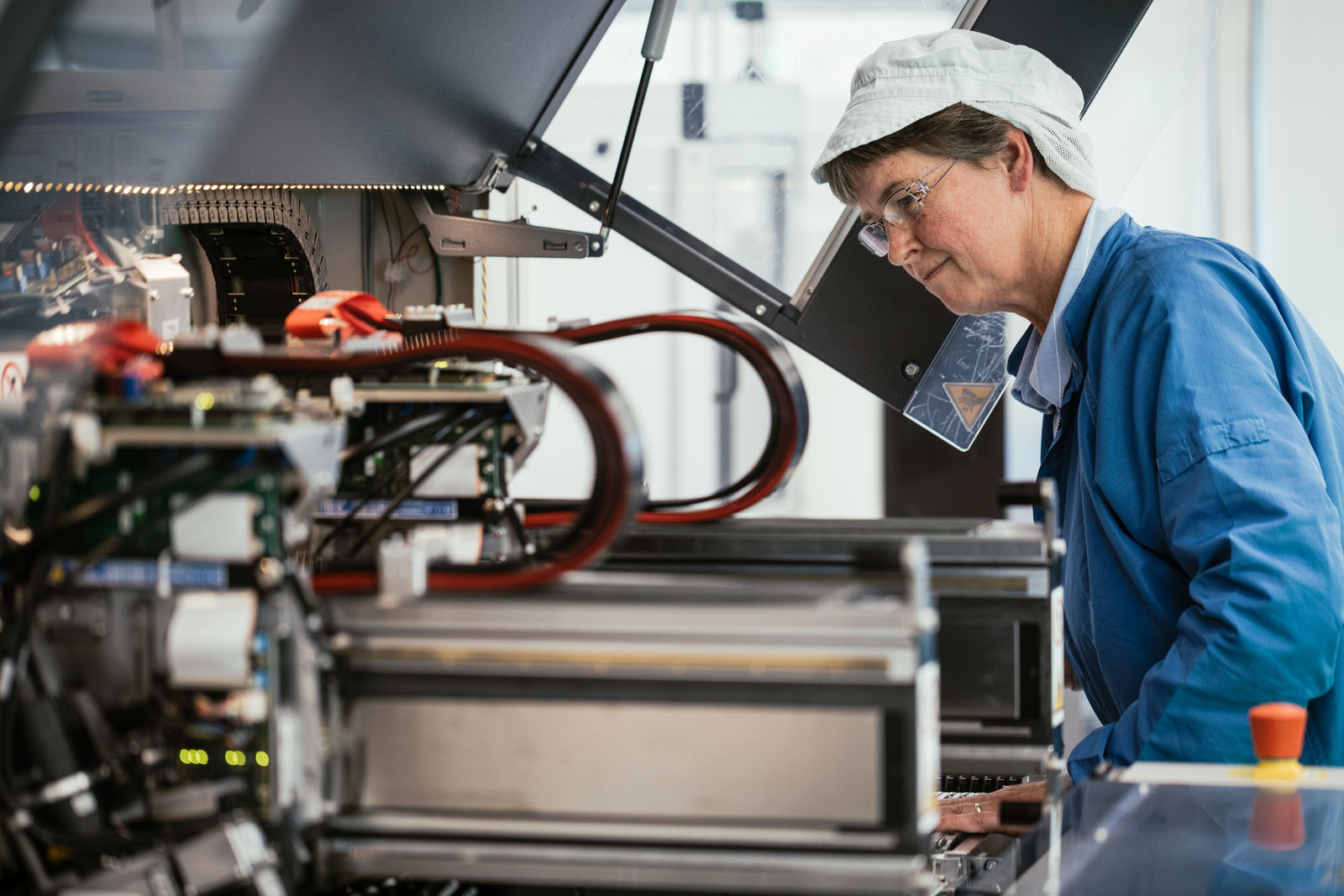 Now, instead of manually picking up the components and moving them between the more than 20 machines involved in the manufacturing process, the robots do this automatically. Vibeke’s role is to function as a specialist who operates and monitors the robots

Aside from introducing more varied and engaging work for employees, switching to automated production at Præstø has meant significant productivity gains. Today, the facility produces three times as many chips as before, and there are less errors.

There are also benefits in being so close to GN’s R&D at HQ, just an hour’s drive away, where the brains behind the brains – that is, the engineers who design the chips – can more easily collaborate with production than if manufacturing of this component was offshore.

Losing the boring bits as work gets more interesting

There is no doubt automation will continue to change the nature of work, not only in manufacturing, but in many other occupations, too. It does not necessarily mean there will be fewer human jobs, though, but rather that simple, repetitive tasks get filtered out. Going forward, we can expect to lose some of the boring bits in our work, but on the flip side find that it becomes more interesting and decisively more human.

1. Workforce of the future: The competing forces shaping 2030, 2018, PwC
2. Jobs lost, jobs gained: What the future of work will mean for jobs, skills, and wages, McKinsey, November 2017
3. Jobs lost, jobs gained: Workforce transitions in a time of automation, McKinsey Global Institute, December 2017
Automation definition, Britannica
Read more news
GN.com uses cookies to analyze traffic, maximize user-friendliness and improve functionality. By continuing to browse this website you agree to our use of cookies for these purposes. Read more about our use of cookies and how you deactivate cookies in our Cookie policy